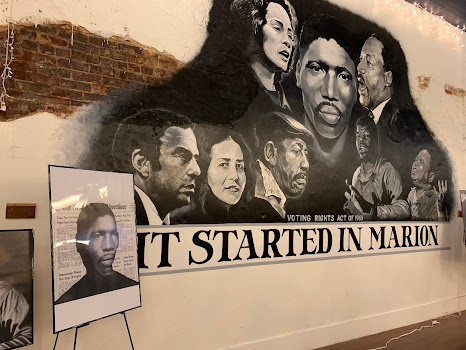 Today’s adventure first centers around Marion a small but important place in our civil rights history, but first we’ll take a little side trip on the way down. Your GPS will find the best way for you to leave Birmingham toward Marion, but eventually, it will put you on Route 5, a two-lane country road that winds its way through the pines.

We plan to stop at Coretta Scott King’s childhood home and the place where she and Dr. King were married. If you want to GPS it, the coordinates are 32.745697 -87.365767. (You may have already correctly guessed that this is out in the country.) As you are coming down Route 5, just after milepost marker 69, you will turn right on Highway 16. Continue for 3 ½ miles and turn right on Route 29 and in approximately 2.3 miles you will see Mt. Tabor AME Church on your left. Pull into the turning area on the left to park. You will see the childhood home in front of you, now owned by daughter Bernice. No one is living there at this time. The Kings were married on the front porch. You can also see Coretta’s father’s store. There is a bust memorializing Mrs. King at the church.

This is the small community known as Heiburger. Mrs. King went into Marion to school and graduated from the Lincoln School. Lincoln School dates back to just after the Civil War. This was a school for former enslaved children created and run by nine former enslaved men. It became a Normal School, training teachers for the future. It ultimately, after 100 years found its way to be the roots of Alabama State University.

When you’re finished looking around, head back down Route 29 into Marion. Marion was established in 1817 and first named Muckle Ridge. The name was later changed to Marion in honor of a Revolutionary War hero, Francis Marion. (I think that was a smart idea. I mean, “Muckle Ridge”??) Anyway, it’s the county seat of Perry County with a beautiful antebellum courthouse. It’s population demographics of today are typical of what they have always been – almost 70% Black and just under 30% white. This is important to remember when we consider what happened in Marion in 1965 and what has happened there since then.

After the Civil Rights Act of 1964 (thanks to the Children’s March in Birmingham), public spaces began to be desegregated. The separate waiting rooms, rest rooms, and water fountains slowly became a thing of the past. All the Movement began focusing on voting rights. The emphasis in the Deep South was trying to get people registered to vote. That was a very difficult and challenging task.

The power to decide who could register to vote rested in the hands of the white registrars. Impossible questions were set up, such as “how many bubbles in a bar of Ivory soap,” or “how many jellybeans in a jar. There were more relevant questions which required the one trying to register to describe a portion of the state constitution. Of course, then the registrar had the authority to say if the person had explained that section well enough. There were also poll taxes and “grandfather clauses.” These stated that unless your grandfather had not voted, you could not vote, and, of course, we know the chances of their grandfather ever having voted.

Those difficulties were only part of the problem. The names of those who had tried to register were published in the newspaper. There would be consequences because of those attempts to get the right to vote. You might find yourself suddenly out of a job. Your mortgage at the white-owned bank might be recalled. The loan you took out for your car might be rescinded. When you shopped you might find your line of credit revoked. You might be harassed or beaten. Shots might be fired into your house. Or your family might find you, like Herbert Lee in Amite County, murdered.

It is hard for us today to imagine what it was like for Blacks, especially in the South, up through the 1960s. The people who worked so tirelessly for the right to vote absolutely put their lives on the line every single day. We cannot forget that, not only to honor their memory, but to make sure we don’t lose that right to vote. We must be diligent about the legislation that is happening and use our power of the vote to be sure harmful legislation is not passed.

Now, back to what was happening in Marion. SNCC and SCLC had sent their forces around the state and the intrepid trio of James Bevel, Diane Nash, and James Orange were working hard especially with young people, in Perry and Dallas County (where Selma is located.). By the way, James Bevel and Diane Nash had married in 1961 and had 2 children, but the marriage didn’t last. They were divorced in 1968. You should google Diane Nash as she is definitely one of the unsung heroes of the Movement.

Now I will tell you  an important, little known backstory that truly shaped the Movement. On this particular day in February 1965, James Orange was arrested. Instead of the usual charges, he was charged with contributing to the delinquency of a minor. That was a much more serious charge, one that would send him to prison. He was incarcerated in the jail in Marion at 202 Pickens Street.

The rumor went around that the Klan was going to break into the jail, kidnap James Orange, and lynch him.

C.T. Vivian, one of the great preachers of the Movement, acted. He called for a special service at Zion Methodist Church at 301 Pickens Street, just a long block from the jail. After the service, the congregants were going to march to the jail and hold a candlelight vigil, pray and sing through the night to keep the Klan from getting to James Orange.

The sheriff learned of the plan and gathered every lawman possible, police, state police, sheriff’s deputies and any white male over 21 who had a gun and could be deputized. They were all there waiting on that February night.

When the worshippers filed out of the church, suddenly, the streetlamps went out making everything dark. Then the law enforcement rushed forward, beating the crowd with their night sticks or cattle prods. In terror, amidst screaming and begging, they rushed back to the church. Some ran to a little café, Mack’s Café, behind the church. A few state troopers followed them in, continuing to strike at them. One trooper, James Fowler, was beating 82-year-old Cager Lee as his daughter tried to intervene.

Finally, Lee’s grandson, Jimmy Lee Jackson jumped into the fray. Jimmy Lee Jackson was establishing himself in the community as a hard-working, upstanding young man He had already become a deacon in his church. Some writings say he had recently returned from serving in the Army, but that is probably misinformation. He had tried several times to register to vote, but had been unsuccessful.

As they struggled, Fowler drew his gun and shot Jimmy Lee Jackson point blank. While Jackson did not die immediately of his injuries, he did pass away later at the hospital

The aftermath of that night’s terror and Jackson’s death roused the anger of the good people of Perry and Dallas counties. The leaders of the Movement wondered if they could keep everyone reacting nonviolently. It was critical to the Movement that it stay nonviolent. They could see that the people felt they had to do something, anything. They came up with the idea to have a march where they would carry Jimmy Lee Jackson’s body in his coffin from Selma to Montgomery, lay it on the steps of the capitol, and say, “Look what you have done”.

That seemed to satisfy the people’s need to be doing something, not just to go on as if this pointless death had not occurred. But then the leaders got thinking that it wasn’t very respectful to the body or the family to take the coffin on what would be a several days’ march, probably in the rain.

Dr. King, James Bevel and others talked it over at great length. They knew the people had to take some action but carrying Jackson’s body to Montgomery wasn’t the best way. Finally, they came up with the idea to do the march from Selma to Montgomery but call it a Voting Rights March and let the Jackson family bury Jimmy Lee properly.

You won’t find this in most of the reports, but that idea really came from one of the behind-the-scenes unsung heroes of the Movement, one of the matrons of Selma who saw that the leaders were fed as they met in their homes.

So, that’s how we got the famous Voting Rights March of 1965. More about that later. By the way, it wasn’t until 2007 that James Fowler was ever held accountable for the murder of Jimmy Lee Jackson when he was indicted on charges of first- and second-degree manslaughter. It wasn’t until 2010 when he pled guilty to second-degree manslaughter, saying it was self-defense. He was sentenced to six months in jail, of which he finally served five months.

A great reference in Marion is Della Maynor. While she is too young to have been a foot soldier, she grew up with the stories. She moved away from Marion for a while but has moved back and is one of its best resource persons. She can arrange for you to hear one or two of the foot soldiers, can arrange a tour of the church, and perhaps can even arrange a meal for you if you are a tour group coming through. Della’s contact information is 205-310-9428.

Even if this is a quick stop on your tour, I suggest you stop at the Zion UMChurch at 301 Pickens Street. There are a number of historical markers there. Stop a moment and look around. Try to imagine that night in February and how terrifying it must have been. Remember what that generation went through to have the right to vote.

Walk on to the jail at 202 Pickens Street and see the markers there. There has been a local group that had plans to restore the jail and turn it into a voting museum, but that plan seems to be on hold right now.

If you want to have a meal while in Marion, I highly recommend Lottie’s Restaurant, just around the block from the jail. Lottie’s is at 207 Washington Street. It’s a family-owned business, run by Byron Turner, a relative of Albert Turner, Sr., a civil rights activist who was known as Dr. King’s point man. It was Albert Turner, Sr. who led the mule wagon that carried Dr. King’s body.

It’s time to move on to Selma, but on the way you will pass Jimmy Lee Jackson’s grave on Route 14. If you’re in a bus or large van, you really can’t stop there.  If you’re in a car you might be able to pull into the small entryway if it hasn’t been raining but be careful. It is very easy to get stuck.

The grave is in the old Heard Cemetery, The GPS Coordinates are: N32.658083, W87.273028. If you can, drive by it slowly. You can see which is the grave of Jimmy Lee Jackson, unless some vandals have destroyed it. An assumption on my part, but I think he was buried in the Heard Cemetery because he was with, and had a daughter by, his girlfriend, Addie Heard.)

Next, we’ll head on to Selma for our next stop.

Posted by Rosalie Turner at 7:57 AM